The close and easy accessibility to the dive sites makes diving with Subsurface an ideal diving holiday. The wide variety of coral environments, which we dive, is all between 2 – 30 minutes from our dive shops. Subsurface offers drift dives, night dives, an action packed shark encounter, wreck dives and more. Subsurface also offers dive sites suitable for children and novice divers.

Shown below is a taster of our dive menu. Check out the image gallery for more dive site images, or take a trip to Fiji and explore the beauty of this underwater world for yourself!

Diving outside the Malolo Barrier Reef 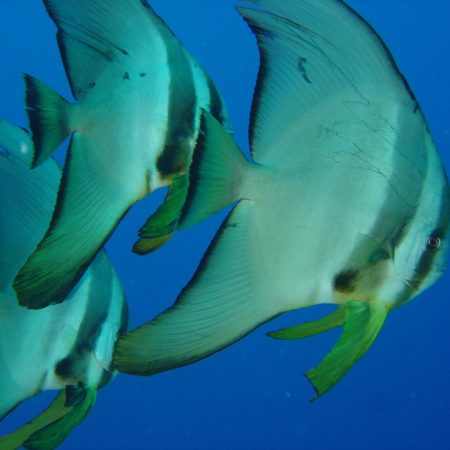 Three pinnacles situated in a passage in the outer Barrier Reef where fish and corals are in incredible abundance. Famed for providing the unusual, Gotham City never disappoints. The soft corals are every colour of the rainbow. 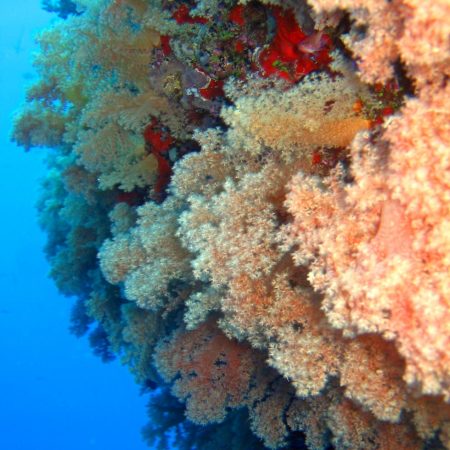 The stunning Namotu coral cay stands perched on the edge of a 1000 metre plunge into the depths of the Pacific Ocean. Diving here on the outer reef slopes is spectacular. The prolific fish life, the visibility (normally 25-50 metres), reef sharks, turtles and schools of Barracuda are all in abundance.

A large pinnacle rising up from in excess of 60 metres. Excellent hard corals and sea fans are observed here, along with resident reef sharks and turtles. This site can produce the unexpected – large sharks, schools of Yellow Fin tuna and other pelagic species. 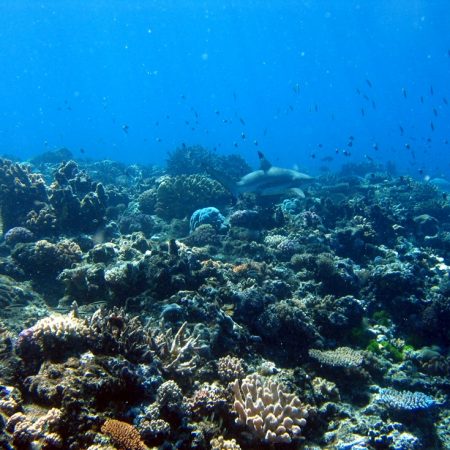 A gap in the outer Barrier Reef that allows large volumes of ocean water to enter the lagoon. Diving in this passage almost always produces fantastic visibility (30 metres plus). Like a number of our other dives, this site will frequently produce the unexpected. Manta Rays, Sharks, Marlin, and other pelagic species are frequently sited here. 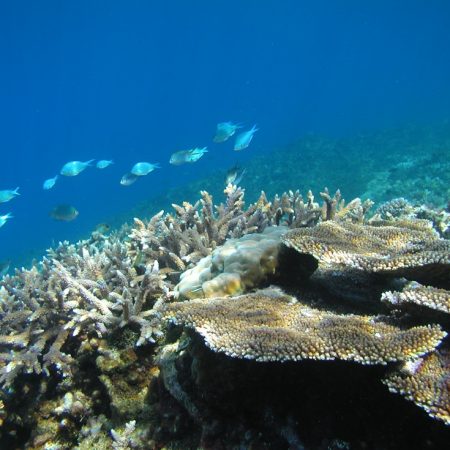 An exciting drift dive with the current running through this passage. Schools of Barracuda and Trevally are common as well as beautiful corals.

Diving inside the Malolo Barrier Reef 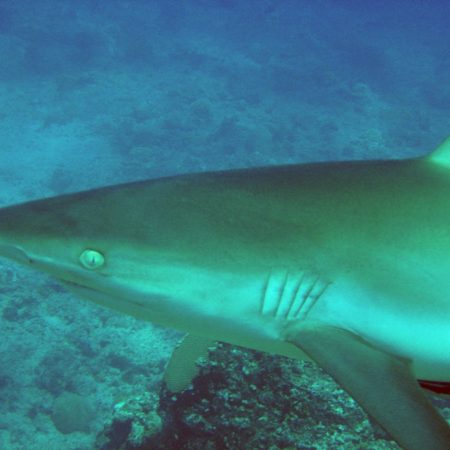 Just 10 kilometres away from the resorts is possibly the world’s most famous shark encounter. Grey reef sharks, White tip reef sharks and black tip reef sharks keep the adrenaline pumping! This is one of our most exciting dives – you can guess where the staff dive on their days off! 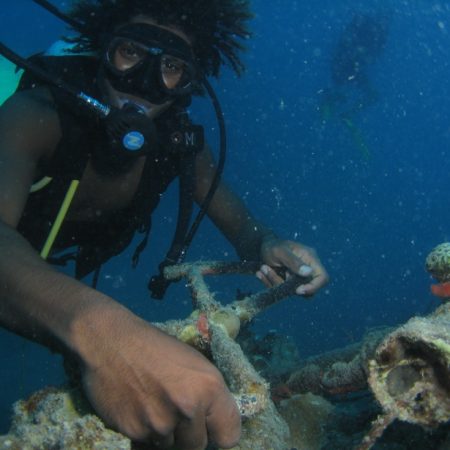 This American Bomber aeroplane crash landed only 1 1/2 kilometres from Beachcomber Island in 26 metres of water. Although the aeroplane is well broken up and strewn across the bottom of the ocean, most parts are still all there. We have connected them by a rope so they are easy to find. Entire wing sections, both engines, tail section, electronics, ammunition, the undercarriage, and in fact, the entire aircraft is on the seabed. Although there are no skeletons to be seen, we understand that all the crew were killed on impact. 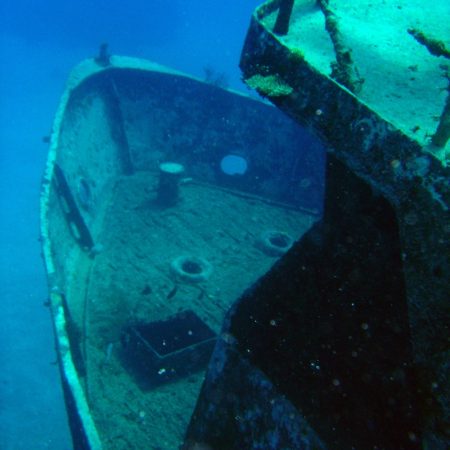 The Salamanda is a decommissioned, 40 metre cruise ship that we sank in 30 metres of water. Diving on a shipwreck is always an exciting dive. The vessel is now covered in soft corals and anemones. Shrimps and crabs in some of these anemones have produced a number of prize winning photographs. 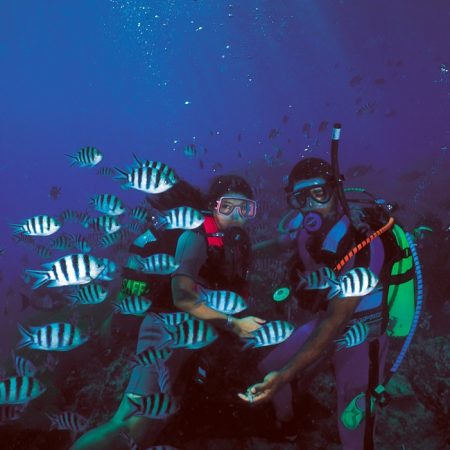 For 35 years the resort has been fish feeding here from coral viewing boats and this has bought about a fish population of great diversity and abundance. Both large and small reef fish, both solo and in huge schools, allow a rare opportunity to see all these fish at one shallow, easy and close dive site. 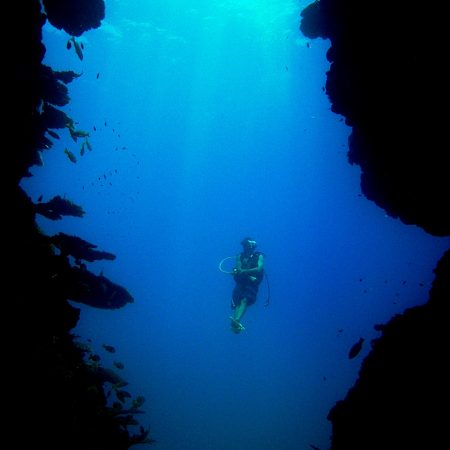 We have two separate dive sites here; Ronnies Reef (named after a famous New Zealand diver) never fails to please even the most discerning of scuba divers. Dramatic canyons and gullies along with great fish life, unusual and spectacular coral formations will be found here. The other site, known as Vomo Caves, consists of caverns and swim-throughs with shafting light breaking through crevices in the reef above makes this dive a very memorable experience. 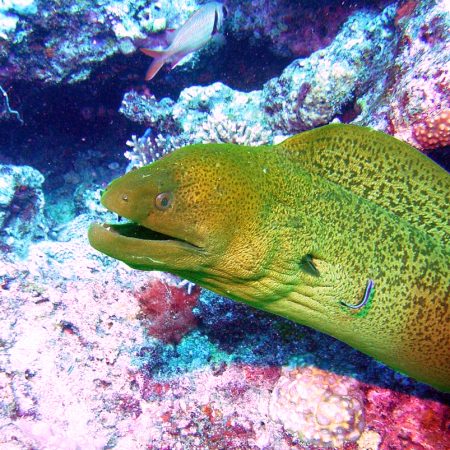 An easy dive in 18 metres of water or less on a series of pinnacles close to Beachcomber Island. Often used for night diving where divers frequently observe Crayfish, Clams, Moray Eels and a multitude of other tropical marine life.

A dramatic sheer wall plunging in excess of 40 metres. This site is known for its swim-throughs and caves, soft corals and plentiful fish action. 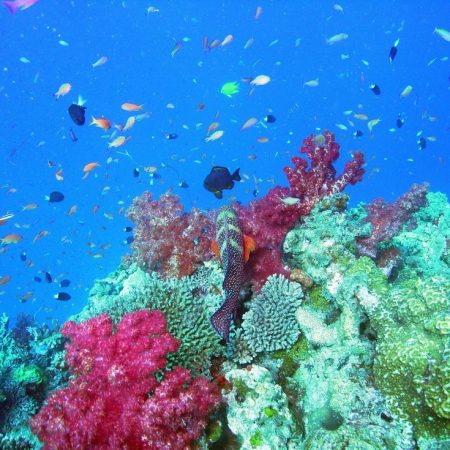 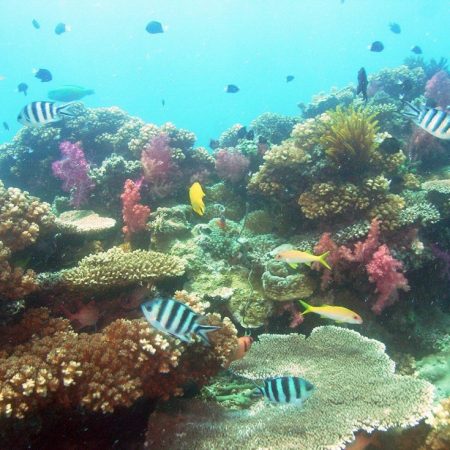 A shallow reef dive with a mind-boggling variety of different corals and reef. Located close to beautiful Namotu Island. 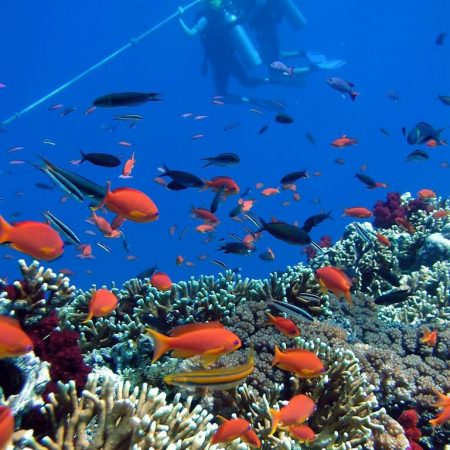 This site is made up of three deep water pinnacles with swim- throughs, lots of large roaming fish, like Grey Reef Sharks, Barracuda, while the top is covered in a clown fish garden. Perhaps our most photographed site! 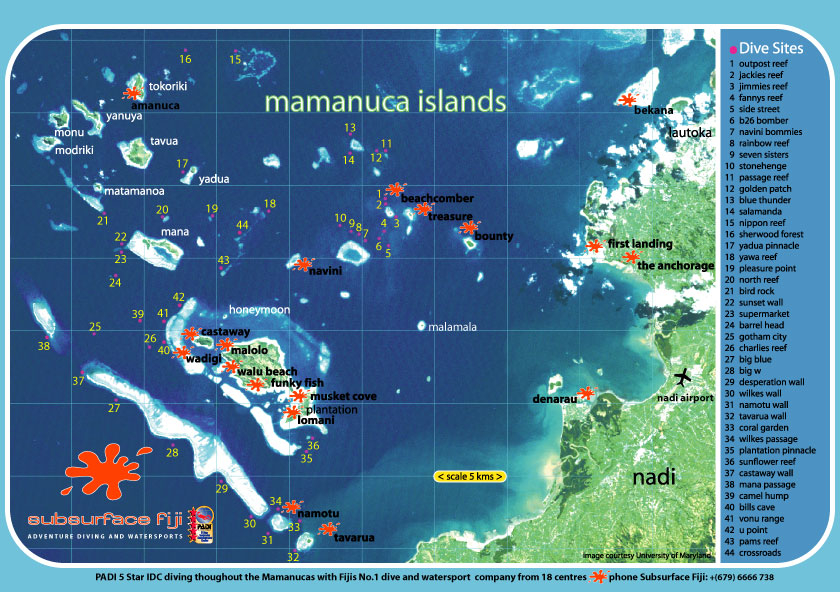