It was a lucky day for two large Hawksbill Turtles stuck in a turtle net off the coast of Viti Levu near Vuda Marina.

On December 30th, Tony Koens – director/owner of Subsurface Fiji Adventure Diving and Watersportsand his partner Carina Bjers, decided to take their Standup Paddle Board out for a leisurely afternoon paddle.

They left the beach and were headed towards Naisoso when a few hundred metres down the coast they spotted a large turtle net that had 250mm square mesh and was about 200 metres in length according to Tony.

As they looked down toward the end of the net they noticed a large Hawksbill Turtle hopelessly entangled and struggling to stay alive. As Tony and Carina struggled to free the stressed turtle from the net, a second and even larger Hawksbill Turtle surfaced very close to them.

This second turtle appeared to be even more entangled than the first but luckily it managed to take in a huge breath of air. Tony and Carina quickly decided that they were going to need a boat, a knife and more people to assist with the rescue of these two gentle creatures of the sea.

Tony immediately started paddling back to Vuda to get a boat while Carina volunteered to stay with the turtles and support them at the surface.

Once at the marina he quickly gathered more of the Subsurface Fiji Staff together – Guy Jakobi, PoniVeikoso, and Samu Ravusou – as well as the Officer on duty from the Vuda Police Post. The team quickly gathered supplies and boarded the boat Vuka Tubu and headed back out to sea to find Carina and the struggling turtles.

When the boat arrived at the scene it was clear Carina was getting very tired from treading water, holding onto the net and trying to keep the turtle’s heads above water so they could breathe. With the aid of an extremely sharp knife the first turtle was freed from the net and quickly swam away – clearly happy to be free.

As for the second turtle it was going to be more of a challenge to free it. The second larger and more tangled turtle was in a much worse predicament as it was very tightly wrapped and the weight of the net was holding it down.

Everyone assisted in hauling up the net with the turtle entangled in it and placed the poor distressed animal on its back on the floor of the boat. The team worked quickly and cut the turtle free from the net then flipped it back onto its tummy.

The turtle started to move a little at this stage but it appeared to be exhausted. 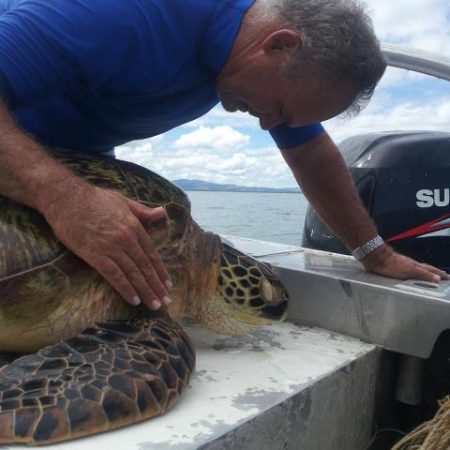 “We decided to let it rest for a while, and in the mean time pulled the net up and placed it in the boat” said Tony. The large and heavy net took about 20 minutes to gather up and when the team checked on the turtle it continued to be laying quite still on the floor of the boat, but its breathing had slowed down and it appeared to have recovered somewhat. Samu and Tony then lifted the large turtle onto the side of the boat at which point it got quite excited and started flapping strongly.

It was then that they knew the turtle was going to be ok, so they decided to put it into the water.

After giving the beautiful animal a last pat they eased it into the water andit disappeared so quickly everyone new it was very happy to be free. These two turtles were lucky to be found by Tony and Carina that day, and they should be enjoying the ocean for many, many more years to come. A big vinaka vakalevu to the entire Subsurface Fiji Team for helping save these two gentle giants of the sea.

By JON PIEPKORN and JOHN ROSS