Subsurface Rescue in the Deep

An afternoon to remember.

On March 18, 2012 the Subsurface Fiji team and boat departed the dock at Musket Cove Island resort for its regularly scheduled afternoon dive trip. Of the six people on board, three of them would have an afternoon to remember for the rest of their lives.

Sunia Raisua, a 22-year-old PADI OWSI (Open Water Scuba Instructor) originally from Navaka Village just outside Nausori and Julius Tiuhea, a 23-year-old PADI Divemaster originally from the village of Malha’ha on the island of Rotuma, would soon be putting to test the skills they had learned during their extensive dive and first aid training.

Along with the skipper of the vessel, and a couple on holiday from Australia (one a diver, and one a snorkeler), 37-year-old Scott Banks from Whangarei, New Zealand, was also on board.

He explained free diving was ‘silent diving’ and it allowed him to get up close and personal with much of the aquatic life that may get ‘scared away’ by the bubbles and noise that scuba regulators can make.

He explained free diving was ‘silent diving’ and it allowed him to get up close and personal with much of the aquatic life that may get ‘scared away’ by the bubbles and noise that scuba regulators can make.

The group headed out to the dive/snorkeling site known as Plantation Pinnacle just off the Southeast end of Malolo Lailai Island. The Pinnacle has been a favourite of locals and guests for years. 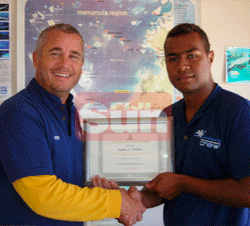 After spending about 40 minutes scuba diving with and showing his one guest all the great features of The Pinnacle, Mr Tiuhea had begun his ascent to do a three-minute safety stop at 5 metres before surfacing and then boarding the boat.

As Mr Tiuhea was ascending, he said he was enjoying watching Mr Banks free-diving down to about 12 meters to observe the marine life at the top of The Pinnacle.

As the safety stop was just nearing the end of their three minutes, Mr Tiuhea noticed Mr Banks just near the top of The Pinnacle and he thought something was wrong as he seemed to be ‘floating’ and not swimming as he had been earlier.

At that time Mr Banks started to float upside down while sinking and gently settled onto the coral on the top of The Pinnacle.

Mr Tiuhea knew immediately that Mr Banks must be suffering from ‘shallow water blackout’, a phenomenon that can happen to anyone, at any time, who participates in breath-hold diving.

Shallow water blackout is caused by lack of oxygen being delivered to the blood supply, starving the body for oxygen.

Those who experience shallow water blackout are subject to drowning, but it can also damage nerve tissue and have long lasting effects.

When free diving, it is particularly important to ALWAYS free dive with a friend or group of friends, and only one person should dive at a time.

Mr Banks described everything in great detail. He had done seven or eight free dives, with the deepest being 24 metres, and the longest dive up to three and half minutes long.
The sea was calm and the sun was out. He remembered feeling at peace, and really was enjoying his time on the boat, and under the water. It was on his final dive as he was ascending that he saw Julius and his guest doing their safety stop on the mooring line.

He looked at his timer and saw that he had been breath hold diving for just over two and half minutes, and he was nearing the surface – just about five metres away.

That was the last thing he could remember before regaining consciousness on the boat.

Acting quickly, Mr Tiuhea brought his diver safely to the surface and informed Mr Raisua and the skipper to be prepared for an emergency.

Mr Tiuhea then went back down to retrieve the lifeless body of Mr Banks.
After surfacing with Mr Banks, Mr Raisua and Mr Tiuhea managed to get Mr Banks on board quickly and assessed the situation.

After determining that Mr Banks had no pulse and was not breathing, Mr Raisua administered rescue breaths and began CPR.

After what Mr Raisua described what ‘seemed like forever’ – yet others at the scene said was about three or four minutes – Mr Banks regained consciousness as his heart beat and breathing were restored.

Mr Raisua then fitted Scott with an oxygen mask and the boat started back to Malolo Lailai Island.

Mr Banks recalls when he regained consciousness on board the boat. He said he felt like someone was sitting on his chest, and he was coughing up blood. He wanted all the people to get away from him as it seemed like he wasn’t getting enough air to breathe.

The boat radioed the dive shop at Plantation Island Resort and had the Subsurface Fiji staff inform the nurse on duty that there was an emergency, and to get medical oxygen ready.

The on-duty nurse was waiting for Mr Banks when they arrived at the resort jetty.
The staff at Plantation Island Resort called for medical evacuation in the way of a helicopter, which then transported Mr Banks to the Lautoka Hospital.

Mr Banks was admitted in the emergency ward, and was later transferred to a recovery ward where he was monitored for three days.

It has been six months since the accident, and Mr Banks said he has been back in the water doing breath hold diving and he still enjoys it, but he is aware of this silent danger and never goes free diving alone.

There are always one or two people with him when he goes out.
What is truly impressive about this story is that these two local boys have received some positive feedback and recognition from the people of Fiji.

On May 24, 2012, Jon Piepkorn (current operations manager for Subsurface Fiji and PADI IDC Staff Instructor) was presented with “Certificates of Appreciation for Outstanding CPR & First Aid Skill and Professional Conduct During an Emergency in 2012”.

Mr Piepkorn accepted the certificates on behalf of the two members of his team from Mr Stuart Gow, chairman of the Fiji Hotel and Tourism Association Dive Committee during the Dive Fiesta event sponsored by Tourism Fiji.

Mr Gow acknowledged awards and recognition should be more prevalent when such an event occurs that could have had a much worse outcome than it did.

Although Mr Piepkorn was fairly new with the Subsurface Fiji team at the time, he said he was extremely pleased to know he was working with a well-trained and confident staff.

Tony Koens, directing manager and owner of Subsurface Fiji said he was very proud of his staff, and pleased with the happy ending to what could have been a tragic story.

By John Ross and Jon Piepkorn